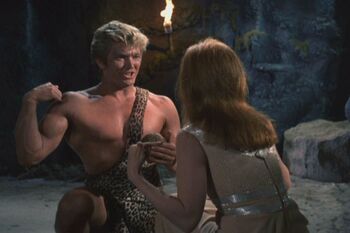 Tongo is a Tarzan-esque ape man who appeared in The Castaways's third year on The Island. Originally discovered by Gilligan, he scared the girls by stealing their cart of fruits and surprising the Howells by leaping over their bamboo chairs. He later kidnapped Ginger, but she managed to escape after hitting him hard with a rock. While trying to abduct Mary Ann, the Skipper, Gilligan and the Professor trapped Tongo in a cage. In secret, however, Tongo revealed the truth; speaking into a tape recorder, he covertly revealed he was an actor practicing for a movie role. He also revealed he recognized Ginger and deduced who the other Castaways were and his amazement at their creativity and ingenuity in catching him. The following morning, he befriended them and started forming a back story for his character by claiming he had swam ashore, but when a large orangutan showed up, he blew his cover by talking in front of the castaways before the orangutan abducted him. The Professor led the rescue attempt to save Tongo, who embarrassed over turning coward at the orangutan, left the island in his helicopter, but not before tossing a note to Gilligan apologizing for leaving them on the island to save face..