Bob Denver was an American comedic actor known for his roles as Gilligan on the CBS-TV series "Gilligan's Island" and the beatnik Maynard G. Krebs on the 1959–1963 TV series "The Many Loves of Dobie Gillis."
Born Robert Osbourne Denver on January 9, 1935, he was a physical education instructor and a mathematics and history teacher at Corpus Christi School, a Roman Catholic elementary school in Pacific Palisades, California when he shot the pilot for the TV series, "The Many Loves of Dobie Gillis" in 1958. After the series was picked up, he left his teaching career and began a long acting career on television. From 1959 to 1963, Denver played Maynard G. Krebs, the teenaged beatnik best friend of Dobie Gillis, played by Dwayne Hickman on "Dobie Gillis." While he was working on the show, Denver also appeared on the NBC interview program, "Here's Hollywood."
Denver's first feature film appearance was in the service farce, "A Private's Affair," with Sal Mineo in 1959. He landed a small role in the 1963 Jimmy Stewart film, "Take Her, She's Mine" playing a beatnik poet working at a coffee shop, where he was credited as Robert Denver. Denver also appeared in the 1964 beach film "For Those Who Think Young" with Tina Louise prior to the development of "Gilligan's Island."
Bob also had a one-time role replacing the actor who played Dudley A. "Dud" Wash, the husband of Charlene Darling of The Darlings, on "The Andy Griffith Show," which was aired March 30, 1964. This was done by the network to promote Denver's face and make him more familiar to the viewing audience, since "Gilligan's Island" was about to go on air.
Denver is remembered primarily as a comic actor. However, he also appeared in one dramatic role on television, as a physician a physician named Dr. Paul Garrett in one episode of the CBS-TV series "Dr. Kildare," which also featured Barbara Eden and Ken Berry, two other prominent Sixties actors who went on to successful TV careers.
After "Dobie Gillis" ended in 1963, Denver landed the title role on the sitcom "Gilligan's Island," which ran for three seasons from 1964 to 1967, and became a staple of later syndication. His role as the well-meaning but bumbling first mate among a small cast of shipwrecked castaways became the one for which he is most remembered. During the run, Denver privately went out of his way to help his costars who warmly appreciated his efforts, such as successfully demanding that Russell Johnson and Dawn Wells be included in the series' opening credits and insisting that Wells get an equal share of the show's publicity with Tina Louise. 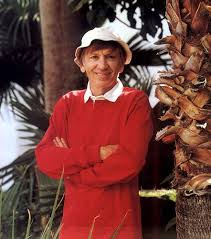 After the conclusion of Gilligan's Island, Denver appeared in the 1967 comedy film "Who's Minding the Mint?," going on to other TV shows in the late 1960s and early 1970s, including "I Dream of Jeannie" and "Love, American Style". In 1968, he starred in the infamous sitcom "The Good Guys", which guest-starred Alan Hale, Jr. in three episodes. In 1973. he starred in "Dusty's Trail," a facsimile of "Gilligan's Island" with the basis of a lost wagon train. He also starred as Junior in the Sid & Marty Kroft children's program "Far Out Space Nuts," and the movie, "The Wackiest Wagon Train in the West," a feature movie created from several episodes of "Dusty's Trail" A decade after CBS left the castaways in limbo, he returned to the role of Gilligan and reunited with many of his former co-star castaways in the animated The New Adventures of Gilligan and its sequel, Gilligan's Planet, as well as the live-action made-for-TV reunion movies Rescue from Gilligan's Island and The Castaways on Gilligan's Island, which was going to set the pilot for a new series. After The Harlem Globetrotters on Gilligan's Island, he also played four separate guest roles on "Fantasy Island" between 1978 to 1980. In 1983, he starred in another television pilot, "The Invisible Woman" as the bumbling mad scientist uncle of the title character, a journalist played by actress Alexa Hamilton. He also appeared in the TV movie, "High School U.S.A."
Later in his life, Denver returned to his adopted home of Princeton, West Virginia, and became an FM radio personality. He and his wife, Dreama, ran a small "oldies format" radio station, WGAG-LP 93.1 FM while he earned a small income making public appearances, often costumed as Gilligan. During the 1980s, he re-created the character of Gilligan for numerous cameo appearances, including episodes of Alf, "Meego" and Baywatch, as well as a bartender in the 1987 film, 'Back to the Beach." In 1992, he again played Gilligan to benefit the Make-A-Wish Foundation for a West Virginia fundraiser for the organization. He also appeared in the NBC docudrama Surviving Gilligan's Island, which co-starred his "Dobie Gillis" co-star, Dwayne Hickman, as a network executive.
Sadly, Denver died September 2, 2005 at Wake Forest University Baptist Medical Center in Winston-Salem, North Carolina of complications from treatment he was receiving for cancer. However, reports of his death once again began trending on the social websites, Twitter and Facebook, in September 2012, even though it had happened seven years earlier.

Retrieved from "https://gilligan.fandom.com/wiki/Bob_Denver?oldid=17702"
Community content is available under CC-BY-SA unless otherwise noted.